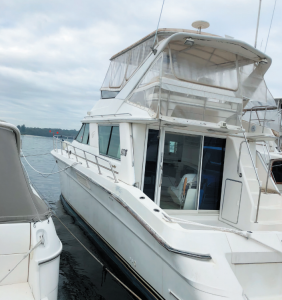 In early April 2020, Perth Pest Control (PPC) received a phone call from a client who claimed he had termites on his boat, which was moored at a yacht club on the Swan River. The owner of Perth Pest Control, Mark Moyle, only gets involved on unusual jobs. This particular call was a curious one, so he attended the site to see what was going on. The client had engaged another pest control company two weeks earlier who had put two generic above-ground bait stations in the engine room on the two main wooden structural beams (encased in fibreglass) that run from the bow to stern. The boat was a fibreglass sedan with two 2.5-tonne diesel engines mounted on each half to the main beams – yes the beams with termites in them! The owner called Perth Pest Control because he had already lost confidence in the knowledge of the incumbent service provider who had stated words to the effect that “we will give baiting a try for a few weeks and if not successful, we may need to spray.” Upon removing the lids of the existing above-ground stations, Mr Moyle was taken aback by the sheer number of termites and the hyperactivity. Experience and intuition told him that this situation was something different. Whilst they looked like Coptotermes michaelseni, he took samples to the Department of Primary Industries and Regional Development for identification. Government officials also believed them to be C. michaelseni but were uncertain, so had them sent for DNA testing. The results confirmed that they were in fact dealing with the invasive termite Coptotermes formosanus. Originally from China, Coptotermes formosanus has spread throughout many Asian countries and the US, and is considered one of the most damaging species of termites. It is not present in Australia and is therefore considered a reportable invasive pest. The owner had imported the boat from the USA some seven years earlier and up until 2020 had seen no evidence of termites on the boat. Mr Moyle immediately contacted Joanne George, business manager for Sentricon, for advice on dealing with this species using a baiting program. Corteva Agriscience supplied prompt and extremely valuable information that provided insight into behaviours the termites might exhibit, including feeding behaviour and expected bait consumption. Now armed with information, Mr Moyle knew they were dealing with overeaters and that colony elimination would take a little longer than expected. As the generic above-ground stations had only been mounted two weeks prior, and the termites were confined in a sealed vessel, Mr Moyle was confident that switching them out for Sentricon AG Termite Stations would not interrupt their feeding. Following the success of the first station being switched to Sentricon, the second station was then changed. The treatment plan was to simply follow the proven methodologies of the Sentricon system. The valuable information provided by Ms George had allowed the appropriate expectations to be set for both Mr Moyle and his client as well.

As this was deemed a level one biosecurity risk (with no other active cases of this feared invasive species in Australia at the time), the West Australian Government was pushing for a quick elimination – which was impossible to guarantee. With many years of experience managing termites, Mr Moyle knew that no timeframe for colony elimination could be given, only an estimate. In his experience it would take around 3-6 months, depending on several factors, such as the size of the colony and climatic conditions aboard the vessel. In June, two months after the initial discovery of termite activity, the case was handed to the Australian Department of Agriculture. This marked the start of a challenging period while colony elimination was attempted. Department officials inspected the boat and gave strict directions about measures needing to be taken, which included sealing all vented areas with TermShield termite mesh to prevent any alates taking flight. The problem was that the Biosecurity Act did not allow for baiting, it only calls for fumigation and heat treatment. Evidence-based debate on the best method of controlling the termites continued for several months, with the Government pushing for a quick solution. When presented with the facts about the limitations of fumigation and heat treatments – particularly in this case, where the timbers on the boat were wrapped in fibreglass – Government officials agreed to change the law. While the debate had been raging on, the Sentricon system was steadily at work. Feeding on the aboveground Sentricon stations was intense. At the time of calling colony elimination in November 2020, 1.95 kg of Sentricon bait had been consumed. The Government department entomologist flew to Perth and carried out an extremely thorough inspection that confirmed no termites were present and no alate flights had taken place. As an additional measure, an inspection regime was put in place for a period of 12 months. This case was the first time Coptotermes formosanus had been controlled in Australia – a historic and significant achievement for Perth Pest Control. Interestingly, the boat in question had been fumigated before it left Florida some seven years ago; further evidence that fumigation is an ineffective measure against termites. Mr Moyle truly believes that whilst he has been hands on with termite baiting since 1997 and has managed over 14,000 colony eliminations, “it means nothing if you become arrogant and do not treat every site as an individual [case]. At some point, you will have a problem. Don’t be scared to put your hand up and ask questions when dealing with termites who can quite easily teach us a lesson, no matter our experience.” By taking the approach to treat every site with an open mind, Mr Moyle not only saved his client’s valuable 55-foot asset from destruction from termites, but also successfully led the country’s first elimination of a highly destructive invasive species.

We’ve just launched our new website!  On the site we’ve put a lot more information about the wide range of services we can provide. We’ve got a lot more pictures and many videos and in fact, don’t forget to visit our You Tube channel HERE and see even more videos including a few weird and whacky ones!  We hope our new Perth Pest Control site answers all your questions about pests and pest control here in WA and if you’d like further details, call us on 1300 89 60 70 or email admin@www.testing.perthpest.com.au

Are you aware the licencing body of the pest control industry in Western Australia – the Health Department of WA – when issuing licences to commence a pest control business, doesn’t require licensees to have any insurance nor does it require them to get police clearances??!!

This lax attitude from the department simply encourages poor practices and can cause serious issues for homeowners and businesses alike. We have campaigned for change to make the industry safer for all concerned however so far this request has fallen on deaf ears.  Like to change? Email the department:  pesticidesafety@health.wa.gov.au.

Perth Pest Control made their largest single donation to Telethon of $30,000

Perth Pest Control is proud to announce they have committed an annual percentage of every pest control service conducted, total company turnover and planned special events for Telethon.  Perth Pest Control is operated by the Moyle family and having many siblings, the directors of the company appreciate the services Princess Margaret Hospital has to offer and the benefit to the community it brings and as such, wish to give back to the community and do so as a long term commitment.

Perth Pest Control is one of the first companies in Australia to be Accredited to offer the new FMC Million Dollar manufacturers termite damage warranty.

Channel 7 ‘Today Tonight’ program reports that up to 70% of Australia’s pest Control Industry may not be fully insured.

Perth Pest Control’s pre-construction division to support the Association for the Blind of WA.