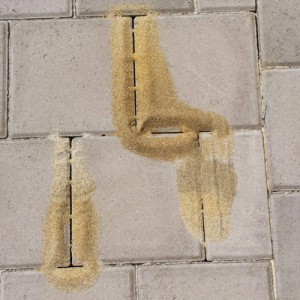 Picture shows typical ant mounds between pavers on a driveway

In Australia we have a huge number of varieties of ants and each type follows the basic structure of living and working in colonies with their populations being made up of worker and soldier ants plus a single queen. Their colonies tend to be permanent in nature and can be located in soils outdoors where their activity can be seen by the deposition of soil on footpaths, gardens etc. They will also nest in timber under pavers, in wall cavities and in roof voids so knowing how to get rid of ants can be a priority.

Ants are a highly developed social insect that will travel long distances for food following trails they’ve established and clustering around their food and becoming an unwanted nuisance in Western Australian homes and businesses.

In Perth the most common types of ant species present are: 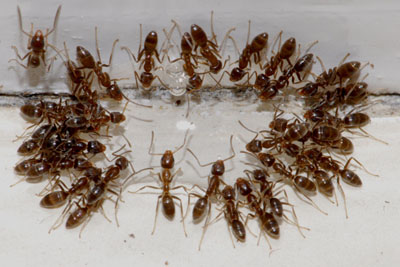 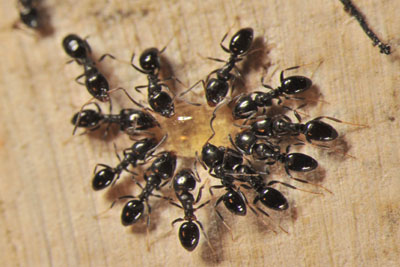 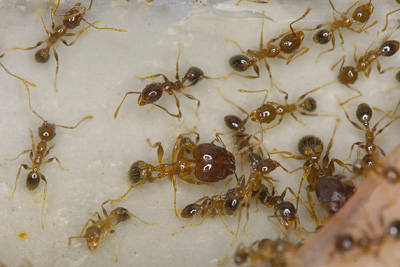 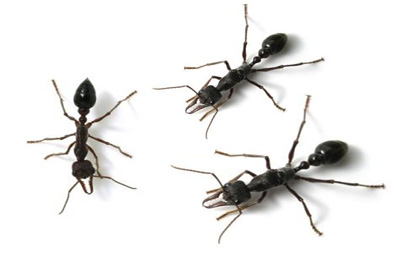 Note: Termites (commonly called White Ants in Australia) are not related to ants. They have different body structures and different eating habits.

Ants may not seem to be a destructive insect and in a lot of instances may be seen to be more of an annoyance than anything else however they can cause problems so ant control and even knowing how to get rid of ants can be very important. Ants themselves generally aren’t infectious disease ridden insects rather, they can tend to be disease carriers bringing possible germs into your home. Coastal Brown Ants, for example, can carry disease organisms such as dysentery and smallpox as well as bacteria such as Salmonella.

Ants can also be aggressive in nature particularly in Western Australia with Bull Ants quite capable of inflicting a nasty bite to the unwary … a not uncommon occurrence on a Sunday afternoon BBQ!

Ant problems sometimes aren’t that obvious.  Whilst ants don’t eat wood, they can nest and live in it quite comfortably and from there can travel to other areas such as electrical or hot water systems where their activities have even been known to causes short circuits and even fires.

Outdoors, ant activity can be seen on the surface however more damage may be occurring under pavers or concrete where cracking damage may be happening but may not be visible. In Australian backyards, it’s not uncommon to see pavers drop or become uneven due to ant tunneling and how to get rid of ants causing that destruction may prove to be quite a difficult task.

HOW TO CONTROL ANTS WITHIN YOUR PROPERTY

Ants are one of the most difficult, if not THE most difficult type of insect to control. At any one time, what we see on the surface is only 5% of a colony. “Old” remedies such as pouring boiling hot water or petrol over the ants, or spraying them with hardware store bought repellent dust, will only be temporarily successful as the majority of the colony will remain safely underground and will simply relocate or resurface a few weeks later.

At Perth Pest Control we have a great deal of experience in the control of ant colonies and we would recommend the following methods:

Contact us at Perth Pest Control for details of how we can solve your ant problems.

How long does your treatment take to work?

The products we use will be taken back to the colony where it is passed on to the larvae. This accelerates the destruction of the colony which should only take 2 – 3 weeks.

How long will your ant treatment last?

Our treatment involves the use of a non-repellent liquid insecticide which means it won’t kill ants on contact but is taken back to their colony where it is secreted to other members and over a short period of time that colony will die. We warranty our treatments for 3 months however keep in mind other colonies may arise in the future and in fact there have been instances where, due to a number of colonies present, the problem took over 6 months to remedy.

I’ve heard that if I have black ants I won’t have termites … is that true?

No. It’s true black ants will attack termites but termites operate in hidden chambers which can be in the immediate vicinity of black ants but the ants won’t even know of the termite’s presence so the two species can coexist.

I bought an ant treatment from a local hardware store and it seemed to kill all the ants I saw but a week or so later I saw more ants appear why is this?

Store bought ant treatments (eg powder) quite often are repellents that kill the ants on contact. When you see ants you’re only seeing a tiny portion of their colony and these products may not kill the ants you can’t see. When a store bought dust or spray is used, the colony just “closes shop” for a few days and will soon return as though nothing has happened.